“One of the worst thing about software is that someone has to write the manual.“
– anonymous

LGC 3.3.18 has been released some weeks ago, just before my lesson about gamebook writing softwares for the italian educational publisher Tambù. The new version contains bugfixing and the new icons for HTML and RTF export formats.

END_OF_DOCUMENT_TOKEN_TO_BE_REPLACED

A new release, this one, that is all about the installer. Finally I’ve managed to create a LGC package which contains the software AND a Java Runtime Environment (JRE). No more Java installation needed, in the user systems, no more problems with incompatibility and installation issues, I hope.

Second major change is the release of the Windows version of the installer compiled for 64bit systems. It does not impact on performances of LGC, and relates only to the installer and the JRE embedded.

As always, LGC could be downloaded from this page (inside the official italian website) and it’s donationware. So if you feel that LGC could be useful to you, you could pay me a beer or send me a Halloween/Christmas present via my Amazon wishlist.

I think it’s clear to everyone that this blog is not updated from the author BUT the software is! From the last post here, we had have so many new versions and so many new features and bugfixing…

Now in LibroGameCreator, THE gamebook editor, you could find:

An unexpected release of LibroGameCreator, mostly due to an unbearable nest of bugs in the old editor component, one of the few freely available for Java.

So two weeks ago I’ve decided to start from scratch. Using some hour of sleep at day, keeping a steady rithm developing at night, I’ve rewrited the editor, changed the icons, and reused only a bit of the original code.

Some tests have been made from writers of the italian community and it seems that old bad habits of LGC editor have been eradicated.

Spring release for the interactive book editor, LibroGameCreator, which gains a “minor” version, going from 3.2 to 3.3. There have been numerous changes including the introduction of various features that have long awaited in my hard disk to be completed. To avoid updating the manual this time I will examine in depth every new feature, to clarify its use with lots of colorful images.

It should have been one of the first features, but I used to bang my head several times against the monitor while I decided to revise an old gamebook, Obscura Genesi, to decide to implement it. I derived it in the format from the ebook editor, Sigil, adding some changes to fit the needs of LibroGameCreator.

The validation of the librogame starts from the button in the main bar or from the Book menu.

The button starts the validation, which will reports:

By clicking on a row of the results table, the editor will move to the paragraph relating to the error.

Each object parts of the structure of a LGC3 gamebook was originally called Entity. The basic idea was to build a generic and modular database, which support text entities but also abstract entities such as the game hero, opponents, items, each with its own attributes. The hero would have had scores (strength and stamina), weapons abilities. With a suitable parser, like that of the Adventurescape engine, we analyzed the meta text of the chapter, containing the narrative part and the interactive code that was based on the value of the attributes to manipulate it, allow access to otherwise hidden sections, start the fights and so on.

Adventurescape project has remained in the hard disk and no one has picked up the idea, so the Entities have become an annoying and difficult to understand element of LGC3, which I finally decided to hide. In the Preferences menu you will now find the item Show generic entities, which is deactivated by default.

In this release I’ve added the Sections, parts of text that make up the interactive book, even though it is not really a game chapter. Sections can be created, modified and deleted as chapters and as these are defined by a name (an alphanumeric identifier as “rules”) and by a title (for example “Game Rules”). When exporting the file, priority will be given to the title and only in the absence of this the name will be used.

With the Sections you have the possibility to introduce texts such as the introduction and the epilogue, the rules, the colophon and whatever else, sections that we find in every book.

To decide whether to export them and in what order, there is a new page, dedicated to the structure of the book, accessible from the Book menu.

On the left there is a list of all Sections, including the standard one of the Game Chapters. On the right there is the current TOC of the book, composed by the sections which will be exported. Sections can be moved between the two sets with simply draging & dropping them (you can select more than one using CTRL + mouse click or select all with the CTRL + A shortcuts).

The TOC is saved in the LGC3 file with the other data.

The elements belonging to the now hidden Game entity have been grouped into a text information window, accessible from the Book menu. You can enter the author, the title and book’s version. It also shows the number of characters and the word count (number of chapters are included).

The reading history was an old LGC 1 feature (a vintage version still used by some well-known Italian writers).

At any time the History records the “movement” between paragraphs. When you want to use it, for example to save a sequence of paragraphs for a test, or a series of notes to keep.

The LGC 3 icon bar has been modified, introducing some block spacings for the feature sets: file, export, and tools. In the last part, the one dedicated to the instruments, three new icons are now visible:

I changed many small elements of the interface, to improve usability. The main one involves the chapters tree. I removed the background and colored the individual “page” icons to indicate the status of the chapter.

The meaning of the colors is the original one:

The dialogues are no longer the standard ones but a “homemade” version.

The About window is now complete and shows all the data of the program, including credits for external elements and the names of “supporters”, which I have to integrate with the latest arrivals. 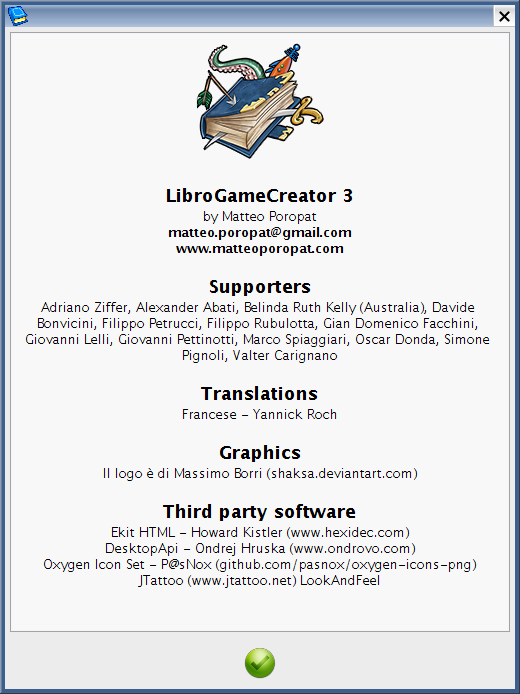 The changelog of 3.3.0 contains numerous entries left out of this post, for which it does not make much sense to go into detail. Those are internal changes and bugfixings, correction of graphical glitches, rewriting of dozens of unclear localization strings. In this regard, the French translation, entrusted as always to the excellent Yannick Roch, is on its way.

I take a break from LibroGameCreator releases to present you a survey about reading and writing interactive books. The idea of Write Your Adventure was born while working with the Italian writer and game designer Mauro Longo (Ultima Forsan) on one of his (many) future books.

END_OF_DOCUMENT_TOKEN_TO_BE_REPLACED

New release of the gamebook’s editor, ready to be downloaded:

– modified the link tag, now the clickable area cover all the characters from { to } 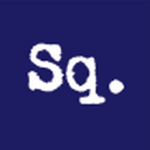 I’ve been away from this blog for a while but the development of LGC has never stopped. Now let’s see the changes made in the latest releases.

All the main modifications made those months are connected to Squiffy format support.

The last release of LGC could import from Squiffy files and export to Squiffy files. If Squiffy is installed, after exporting, the file is automatically opened in Squiffy.

Other import/export features are:

– comments (#) are imported in LGC tag {rem comment} and exported

– master section [[]] is imported in an LGC entity in the setup group. Entity text is then exported to Squiffy file master section

One of the shortest changelog from the birth of LGC, only a bug fixed but a very big one. Some weeks ago, an LGC user contacted me to point out that exporting a gamebook in the ebook format (the less known and used format, I think) images are not embedded.

LibroGameCreator is freely downloadable from here and, as always, it is donationware. 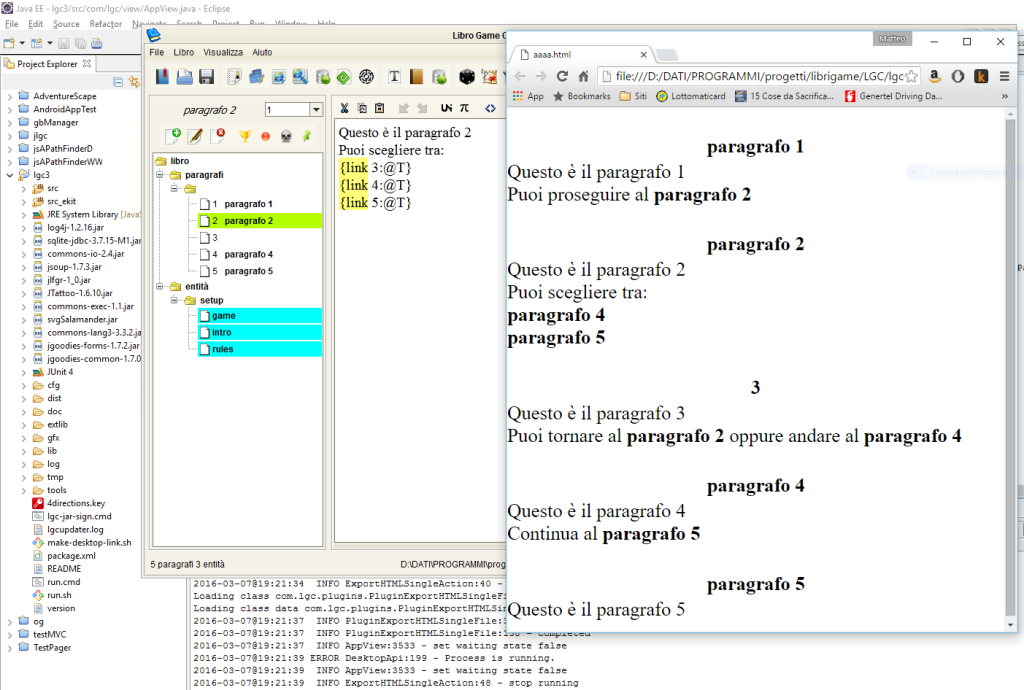 Looking at this blog it could seem that LibroGameCreator development has stopped one year ago. The truth is that the program has evolved, new features has been added and bags of bugs have been thrown away. But everytime I released a new version I’ve postponed the post on the english blog, slowly forget about it.

Today I’ve tryed to recollect all those modifications, and list them below. As always you can download the program here.